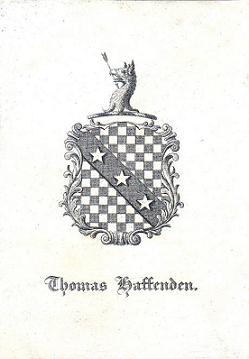 A son of John Haffenden MD, surgeon and apothecary of Ashford, Kent, he was baptized at Ashford 20th April 1785, and was buried at St Mary's, Hanwell, 27th October 1869. A surgeon, he practized in Hanwell, Essex. He married Mary Anne, a daughter of Captain Thomas Smart RN on 7th October 1818; they had children: