A GOSTLING FAMILY FROM KENT

The following is extracted from a notebook written by Eliza Jacob (1836-1913), daughter of Reverend George Andrew Jacob, and wife of Major-General William Jacob (1837-1917), her cousin.

There are three old oil paintings, portraits of Reverend William Gostling, minor canon of Canterbury, and his two sons, Reverend John Gostling and Captain William Gostling, which came from your father's side of the family, and I have in vain tried to find out whether there was any connection between the Gostlings and Jacobs or the Legrands.

During the many years that your father and I were in India all the old members of our family who could have given us information on many points, died - and it seems impossible now to get it. In the Dictionary of National Biography there are accounts of the Reverend William Gostling and his father Revered John Gostling who lived in Charles II's time and had a most wonderful bass voice. I will copy out what is said about them.

"John Gostling, died 1733, Chorrister, was born probably at Canterbury about the middle of the 17th century. Thomas Purcell, the uncle of the composer, wrote a letter dated 8th February 1678/9 to Gostling, in which he says that the composer was engaged on a work which would cause Gostling, then at Canterbury, to be sent for in London. Accordingly, on 25th February Gostling was sworn a gentleman extraordinary of the Chapel Royal, and on the 28th was admitted in ordinary on the death of William Tucker. The entry in the cheque book describes him as a 'base from Canterbury, Master of Arts'. It is fairly certain that he is the John Gostling who took the degree of BA from St John's College, Cambridge in 1762. Gostling was famous for the compass and power of his voice. The opening passages of Purcell's "They that go down to the sea in ships" an anthem written for Gostling, and at his own request, is a lasting witness to his compass. Gostling officiated as one of the ministers at the coronation of James II and William and Mary. He afterwards became a minor canon of Canterbury, Vicar of Littlebourne, sub-dean of St Paul's, and prebendary of Lincoln (25th October 1689). He died 17th July 1733."

The following curious anecdote is recorded relative to the origin of this anthem. King Charles II had given orders for building a yacht, and soon after the vessel was launched he made a party to sail down the river and round the Kentish coast; and to keep up the mirth and good humour of the company Mr Gostling (who belonged to the Chapel Royal and possessed a remarkably fine bass voice) was requested to be of the number. They had got as low as the North Foreland, when a violent storm arose, in which the King and the Duke of York were necessitated, in order to preserve the vessel, to hand the sails and work like common seamen; they at last escaped to land, but the distress and danger they were in, made an impression on the mind of Mr Gostling which was never effaced. Struck with a sense of the deliverance and the horror of the scene which he had but lately viewed, upon his return to London he selected from the Psalms those passages which declare the terrors and wonders of the deep, and gave them to Purcell to compose an anthem, which he did, adapting it so peculiarly to the compass of Mr Gostling's voice, that hardly any person but himself was then, and has since been, able to sing it (Vide Sir J Hawkin's "History of Music", Vol 4, page 359)

Mr Richard Clark (secretary to Glee Club) mentions, in reference to the fine Glee by S Webbe senior that the words "When winds breathe soft" were a versification, by Mr Gostling, of the above anthem - and Mr Webbe the composer, who met with the words by accident, was so struck by their beauty and descriptive power, that he sat down and adapted the whole of them to music, without once stopping until the piece was entirely completed. Mr Webbe himself informed the Editor, in the course of conversation, that he considered the above glee the best he had ever written. 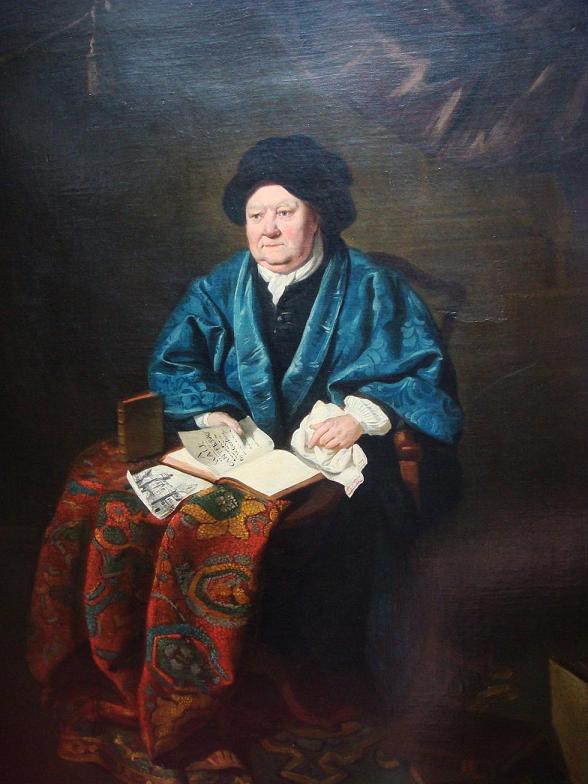 "William Gostling (1696-1777), antiquary, son of Reverend John Gostling, by Dorothy his wife, was born at Canterbury in January 1695/6, and baptized in the Cathedral on 30th January. He was educated at the King's School, Canterbury, where he was a King's Scholar, entering in 1711, and taking the degree of BA in 1715, MA in 1719. All his after life was passed in or near Canterbury and he served in the diocese as curate or parish priest from 1720. He was instituted to the rectory of Brook, near Wye, Kent, on 23rd September 1722. He held a minor canonry at Canterbury from 1727 till his death. His father died on the 18th July 1733, and thereby vacated the vicarage of Littlebourne, a few miles from the cathedral city, to which Gostling succeeded, vacating the benefice of Brook. The living of Littlebourne was surrendered in 1753, on his being appointed to the vicarage of Stone in Oxney. He was thoroughly versed in the history of Canternbury, and delighted to act as guide to strangers. For nearly 20 years before his death his infirmities confined him to his room, where he passed his hours in completing his "Walk in and about the city of Canterbury", while his friends corrected his description by personal observation. Gostling died at his house in the Mint Yard, Canterbury, on 9th March 1777, and was buried in the chloisters on 15th March. He married at the cathedral on 3rd October 1717 Hester Thomas, when they were both described as of the precincts; she died on 24th February 1760, aged 64, and was buried in the chloisters on 3rd March. A large family kept them in poor circumstances all their days. Six of their children died young; two sons and one daughter survived. They were all commemorated on an oval marble tablet on the west side of the chloisters at Canterbury, and the volumes of the Cathedral registers issued by the Harleian Sciety in 1878 abound in references to them. Gostling's "Walk in and about Canterbury passed into a second edition in 1777 ( I managed to procure a copy of the 1777 edition, and it ought to go with the old man's portrait). E J 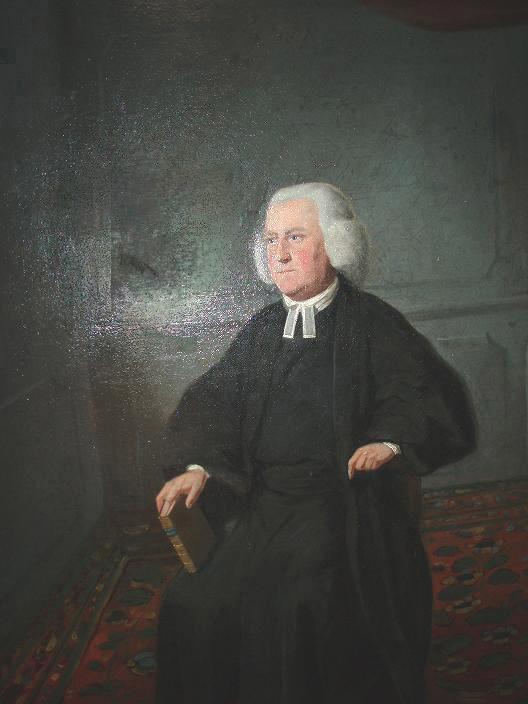 He was a great collector of antiquities and such a collection of curios &c could not have been formed without a considerable amount of expense. Miss Hawkins, in her anecdotes of the Gostling family, says as much. I managed to get get second hand copies of her 3 volumes published in 1822 and 1824, and they ought to go with the Gostling portraits. Besides what she says about the Reverend William Gostling and his two sons and daughter, there are interesting amnecdotes of numbers of well-known people who lived in the 18th century and were known to her.

I copied out the following from the Gentleman's Magazine for 1804.

October 30th 1804. At his house in the precincts of Canterbury, aged 74, sincerely lamented by those who knew his worth, W Gostling Esq Captain of the Invalids in the Royal Artillery. He had been more than 50 years in the service, was in the action at Minden and (among others) had the thanks of the Commander in Chief on that memorable day. Also, in May last, at his house in the same place, aged 80, his brother the Reverend John Gostling MA ,rector of Brook and Alkham, and of Milton Chapel, Kent, Rector of St Peter's, and vicar of Holy Cross, Westgate United, Canterbury. They were the sons of Reverend William Gostling a learned antiquary, and author of "A Walk in and about the city of Canterbury". 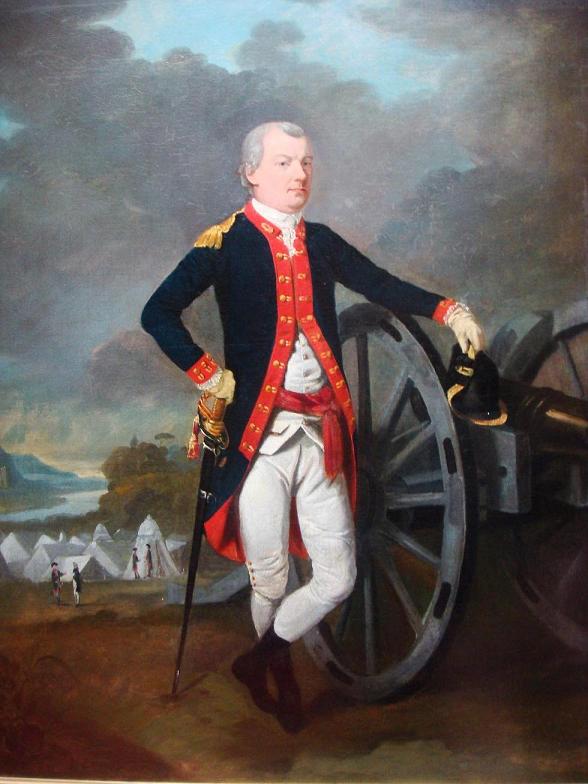 June 26th 1798 about 4 o'clock in the morning in the Mint Yard, Canterbury, Hester, daughter of Reverend William Gostling, aged 79.

You will find the following lines at the back of the old man's portrait; 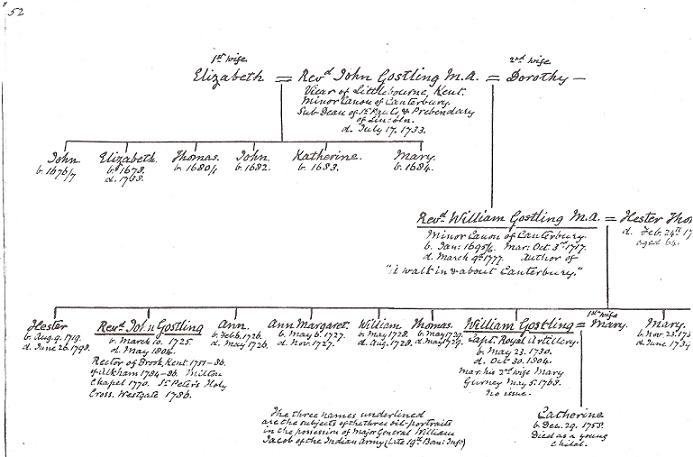