JACOBS OF LAXFIELD, in SUFFOLK

The family history that follows is not complete. There remains much to be added over the coming months from information gathered over the years, as also from on-going research. This family is prolific in its branches and members and it will be some time yet before a full pedigree chart can be prepared.

There were a number of families of the name of Jacob in Suffolk. These held land in the adjoining counties of Norfolk, Essex, Cambridgeshire and Huntingdonshire.There is every likelihood that they were of the same stock, but that will take some time to establish. Posted on this site will initially be the Jacob family of Laxfield, established there from at least the turn of 15th century. Another family was from Buxhall, almost certainly part of the aforegoing families. Perhaps the earliest well-documented family of the name of Jacob lived in Sudbury, court rolls of the town giving references to them from late 14th century onwards. One of the earliest wills of any Jacob still extant is of a Mathew Jacob of Sudbury, proven in 1423, and I am preparing a history of that family. Again, there is every likelihood that they were of the same family. It may well also be that these Jacobs were related to those of Cambridgeshire (see under Jacob Pedigrees 'Jacob Family from Horseheath, Cambridgeshire'). In 4 Henry IV (1402-1403) there exists a Final Concord between Mathew Jacob, John Rougheued, John Porterose, John Bray of Sudbury and Thomas Jacob of Cambridge vs Henry Sewale and Matilda his wife for property in Sudbury. 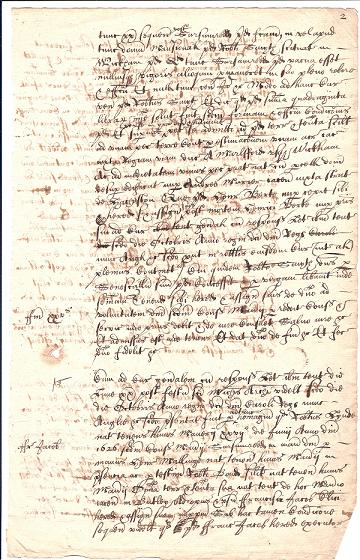 To return to that family from Laxfield, the quasi name Bradlaugh (with its variants) was adopted at an early time, at least by the first of the family appearing in this history, Nicholas Jacob alias Bradlaugh, who had died before 12 Henry VIII (1520-1521). Presumably this came about via a marriage; it is possible that in the male line the name was Bradlaugh in the first instance. Some of the earliest references found so far stem from the Court Rolls of Kelsale. We find a Robert Jacob and his wife Katherine mentioned in 9 and 19 Richard II (1385-1396), a Nicholas Jacob as holding a tenement in Waybread in 29 Henry VI (1450-1451), a John Jacob holding a tenement called 'Garneys' in Laxfield in 6 Henry VII (1490-1491), and a William Bradylaughe alias Jacob and Agnes his wife holding land in Peasenhall in 20 Henry VIII (1528-1529).

I am much indebtened to information supplied to me by the late Trevor Walker Jacob, whom I first got to know in the 1970s. Trevor had the vast majority of Suffolk parish registers inspected by record agents, and Jacob entries extracted, and subsequently spent much time compiling a family tree. We assisted one another in our research. Most of the earlier references having been supplied by me, the later ones largely by Trevor.

However, it had been brought to my notice that he had deposited some original and copies of his research with the Suffolk Record Office at Ipswich; similarly a large quantity of research material, again part in copy, part original, he had deposited with me. I have noticed that a very spurious family tree, at least as far as the early descend of theseJacobs is concerned, has been posted on another site. Even the least discerning family historian will realise this is nonsense.

I should also like to thank Matthew Glozier for a partial pedigree he has supplied, as also for a more extensive one for the Buxhall Jacobs.

The pedigree of the Buxhall family begins with JOHN JACOB.