The following was kindly communicated to me by Dr Zahid Hussain Khoso, a member of a prominent family in and around Jacobabad, Sind, Pakistan. There is a connection with Brigadier-General John Jacob, as will become apparent in the following.

Herewith a brief history of the family:

Dilmurad Khan Khoso revolted against the British in 1857, along with Darya khan Jakhrani and Inayat Shah. Dilmurad khan was sent to Andaman Island (Kala Pani). Dilmurad Khan had a large piece of land in District Jacobabad, which was confiscated by the British authorities. His only son, Bahadur Khan, was about 7years old at that time. It is told that our great grand mother Seza took his son Bahadur Khan to General John Jacob’s Durbar where she protested before him and said “Either take my son Bahadur Khan to his father or give him a piece of land, so that we can sustain our lives here in Jacobabad”. John Jacob showed mercy towards her and ordered a piece of land in village Dilmurad ,district Jacobabad, to be given to Bahadur Khan. Starting with this very small piece of land, Bahadur Khan purchased almost Eighty thousand acres of land in Jacobabad. 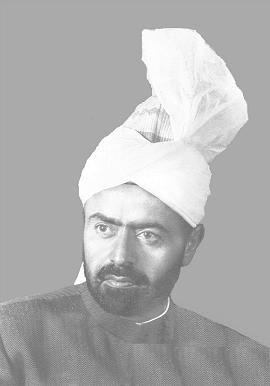 He helped the Government of the time periodically and never showed hostility towards them. He was a progressive landlord of the time, plus an inventive genius who helped several engineers in constructing canals, which was much appreciated by them. Bahadur Khan had four sons namely

After Sardar Khan my grandfather Khan sahib Shahal Khan entered politics and remained a member of the legislative assembly (MLA) until his death in 1956. After Shahal Khan’s death, my maternal uncle Mir Darya Khan s/o Mir Hasan Khan became Member of National Assembly in the period 1962 to 1977. We are still in Jacobabad’s politics as my cousin Mir Hasan s/o Mir Darya Khan is a member of the Provincial Assembly in the current Government.

These were the some services of my grand father and his family towards the British Government of the time.

When we look at the political stature of khan sahib we can very well judge him from the services rendered by him to the betterment of his constituents and from the letters of appreciations of high officials of the colonial period in the country. Even Lord Wavell, the penultimate Viceroy of India appreciated his help in the war effort of the country. Shahal Khan back in 1943 was awarded with a title of distinction and honor: the title of Khan Sahib.

26 November 1929: Affrinama from Governor of Bombay (Sir Frederick Hugh Sykes) appreciating the good services rendered by him in supplying food and labor during the floods.

4th March 1932: Letter of appreciation and thanks from Governor of Bombay(Michael Herbert Rudolph) for valuable assistance given in the census of 1931.

15th January 1934: Shahal khan was granted a chair in the Durbar of the Commissioner in Sind (Raymond Evelyn).

14th December 1935: Letter of appreciation and thanks from The Commissioner in Sind (Raymond Evelyn) for good service rendered by Shahal khan on the occasion of Her Majesties’ Silver Jubilee celebrations.

20th July 1936: Letter of appreciation from Chief Engineer in Sind for the help rendered to Public Works Department during the Abkalani of 1935.

7th January 1937: Letter of appreciation from the Governor of Sind (Sir Lancelot Graham) for the good service rendered by Shahal khan at the time of the construction of the new head to the Begari Canal and in assisting the general administration.

2nd February 1939: His Excellency the Governor of Sind Sir Lancelot Graham appreciated the good services rendered by him to all departments of Government and especially in completing the work of improvement to Unerwah.

18th January 1940: Deputy Commissioner USF and President Jacobabad Show committee awarded him First prize in class I at the cattle show of 1940.

10th February 1940: The District Superintendent of Police USF sent an affrinama thanking him for his assistance to the police in Dacoities and miscellaneous cases.

29th July 1940: Shahal khan Khoso had generously subscribed a sum of Rs five hundred towards the purchase of a fighter or Bomber plane in the Sind Squadron. For this he received a certificate from the Sind War Planes Fund signed by the Governor of Sind Sir Lancelot Graham.

7th January 1941: Sir Lancelot Graham, the Governor of Sind had heard with much pleasure of the good services rendered by Shahal khan in the maintenance of public peace in his district during the period of communal disturbances in the neighboring district of Sukkur in November and December 1939.Shahal khan was awarded an affrinama with a lungi.

22nd January 1942: The Chairman District Sudhar committee Jacobabad awarded a certificate of Merit to Shahal Khan Khoso in appreciation of his valuable help rendered on the occasion of the Rural Re-construction show Jacobabad.

3rd May 1943: General Commander-in-Chief in India, Mr. Wavell in a letter of acknowledgement writes to Shahal Khan Khoso: “I desire most gratefully to acknowledge your gift for the use of the Defence Services, which I have great pleasure in accepting on their behalf. As you know we need all the equipment of this type that we can get. I can assure you that your gift will be put to good use, and that it represents a very real and acceptable contribution to India’s War efforts”.

24th November 1943: The Governor of Sind Sir Hugh Dow in his letter of appreciation writes to Shahal khan Khoso:” His Excellency has heard with much pleasure of the good service rendered by you in promoting the war efforts in your district in many ways. He presents you in Durbar with this affrinama and trusts that you will continue to do good service in future whenever it may be required of you”.

21st December 1943: The Director Public Instructions/Educational Inspector in Sind presents an Affrinama to Shahal khan Khoso:”This certificate is presented to you in recognition of the good and willing service rendered by you in the spread of education in Sind and as a mark of approbation”.

18th March 1944: The Governor of Sind Sir Hugh Dow in his letter of thanks writes to Shahal Khan” I wish to convey to you my very great thanks for the contribution of Rs 2500/- to the purse presented to His Excellency the Governor at the District War Committee on March 18th. I trust that you will continue to help the war effort in future as you have always done in the past”.

1st January 1946: Viceroy of India Mr. Wavell in a Sanad (Certificate) confers upon him the title of KHAN SAHIB as a personal distinction.

21st January 1949: The Governor of Sind Mr. Din Mohammad Sheikh in an affrinama to Khan Sahib Shahal Khan states that he has heard with much pleasure of the good service rendered by him in supplying labour at the Begari Regulator and Shahiwah head during the floods of 1948.

By clicking the book icon below, a number of certificates and other manuscripts relating to this family can be accessed.