He had leased the manor of Tollpuddle, which had formerly belonged to the monastery of Abbotsbury, from the Crown, the lease being granted in Michaelmas 21 Henry VIII. His wife was named Margaret and they had sons Thomas and William (Patent Roll). After the lease expired, he did not try to renew it, but continued to hold lands in Tollpuddle as is shown in 1547 (Patent Roll).

2 William Jacob Esquire, of Bockhampton, in Dorset, ca 1505 - 1580. He married Edith, daughter of Michael Melbourne Esquire and had at least one child, a son

Robert Jacob, of Bokhampton, ca 1540 - 1610. He married Anne, daughter of Thomas Steldon Esquire, of Lyme, Dorset. They had children

Sir Robert Jacob married Mary, daughter of William Lynch Esquire of Southampton and of the county of Galway, Ireland. They had children:

This pedigree was submitted to the College of Arms when Sir Robert was knighted and granted his arms. I have much further material to add to this in due course. 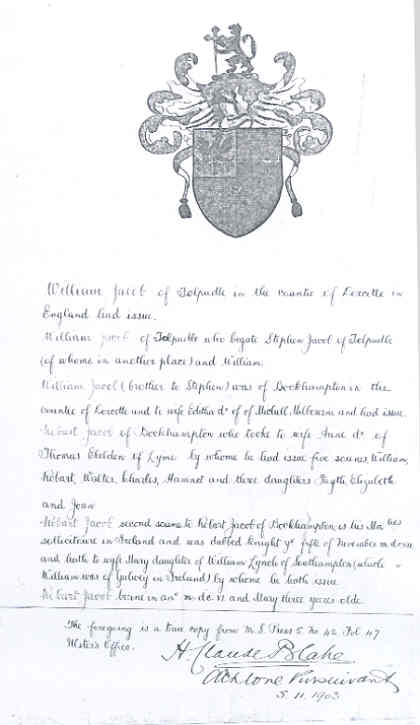