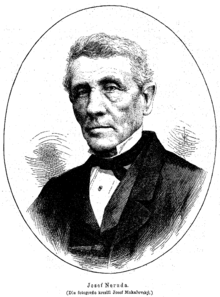 An organist and music teacher, he was born 16th January 1807 in Mohelno and died 18th february 1875. He had ten children, all musically talented, including:

He learned to play the organ in Rajhrad monastery, before becoming a teaching assistant in Namest nad Oslavou. At the same time he payed organ in Haugwirz chapel and taught piano in Olomouc. In 1832 he accepted a position as organist in Brno, which he kept with short breaks for some 36 years.

His major works include five cello concertos, four quartets and three orchestral works. He wrote also many small pieces for piano, organ, cello, violin and some songs. The Cello concerto No. 2 in d minor, Op. 59 has belonged both in past and present times to common pieces of cello repertoire. Cello concertos No. 1 in e minor, Op. 57, No. 3 in A major, Op. 60 and No. 5 in G major, Op. 66 were premiered in May 2005 by cellist Beate Altenburg and Anhaltischen Philharmonie Dessau under Golo Berg. The CD released on this occasion remains the only widely available recording with his works.